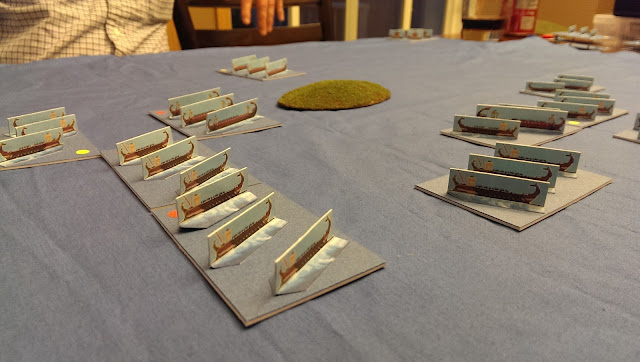 As for naval operations in the canpaign, we allow a fleet to attack any other territory it is linked to by a sea-lane. If the invaders are successful, then adjacent land territories roll for capitulation.
Posted by Pattus Magnus at 19:31 No comments:

The Battle of Brentwood

Having subdued the lands to the South and West, King Daniel, First of His Name, sought to consolidate his hold on the Caravan Road. He mustered his forces and prepared to invade Brentwood.
Fearing King Daniel’s anger, the rival highland city of Edgemont offered submission to his highness.

Posted by Pattus Magnus at 18:57 No comments:

The Battle of Ivory Tower, and the Aftermath

The Hordes of Montgomery prepared for war but their campaign was delayed as Pattus Magnus, High Chief and Warlord, was laid low by Plague.


Upon recovery, Pattus Magnus was even more energetic than before and was driven to make up for lost opportunities. He cast his eye eastward to the lands held by the scholars of the Ivory Tower. His host were like animals and fell upon the army the tonsured eunuchs raised, slaughtering all before them.


Even as the last smoke lingered over the battlefield, the craven rulers of East Ivory, Collingwood and Greenview sent envoys to beg the High Chief for mercy. They offered abject subservience and were welcomed into the High Chief’s realm.
This game was another of the DBA matches. King Daniel and I both played Macedonian Successor forces, since he had recently completed painting his first DBA army (Alexandrian Macedonian) and I loaned him an elephant to make it into something a little more exotic.

The game went back and forth, but the end result was pretty one-sided in terms of destroyed elements. King Daniel was convinced the elephant was defective and was heard to say, "well, I won't be taking one of those again."


Mad with Victory following the sack of Ivory Tower, Pattus Magnus was taken with the urge for some boating. His realm lacked a port, however, so the great Warlord led his host against the merchants in the coastal city of Valley Port.


As before, the High Chief’s warriors were eager for battle. They rushed forward against the paid soldiers of Valley Port like storm-driven waves against a dam. The mercenaries were unable to stand against the warriors’ fury and soon turned in rout.


Valley Port fell to the High Chief, who occupied the city and made good use of the port. He spent the remainder of the campaign season learning the seafaring arts. There would soon be blood upon the waters!

King Daniel's luck was no better in the second game of the evening... my Macedonian analogues took another convincing victory.

In the campaign rules we decided that the capitulation 'ripple effect'
would not extend along shipping lanes; it would be necessary to fight some type naval battle to conquer the islands. The sea-lanes have an advantage, though, in that they directly connect most of the coastal and island settlements, so a naval force setting out from Valley Port could attack anywhere on the north or west coast. ﻿﻿﻿

Posted by Pattus Magnus at 19:18 No comments:

King Daniel the Vast, his Benevolent Majesty, was sorely provoked by his western neighbour, the Count Elect of Arbor Lake. His majesty sent a strong force to demand satisfaction.


The ensuing battle by the fords on the River Arbor was fierce but King Daniel’s foot carried the crossings where they had been repulsed before and were victorious.

As the council deposed the Count Elect and offered abject submission, his majesty spared the city from pillage. At word of this mercy, the nearby towns of Ranchland and Royal Oak invited his benign rule.

One of the aspects of this campaign is that it doesn't rely on one set of tactical rules to resolve the battles. Basically, the result of whatever tabletop game we play is translated into conquered territories. Rather than DBA, this time we fought thes battle using the Battles of Westeros rules. Daniel the Vast had played the Lannisters in scenario twice before and lost both times to his queen, so he assured me that I couldn't lose playing the Starks... I proved him wrong!

I enjoyed the game - it played fairly quickly and once I wrapped my head around the dice and card management system I had fun, even in defeat.
Posted by Pattus Magnus at 18:53 No comments:

The Battle of Bowness


The barbarian hordes led by Pattus Magnus, High Chief of the Montgomeries, raided west in great numbers against their traditional rivals in Bowness, where they swept all before them in red ruin.

Word of the atrocities committed spread quickly in all directions.

In fear of the High Chief's wrath, the elders of the Village of Greenwood, the garrison of the Three Towers guarding the Sarcee Pass, and the Count of Silver Springs bent the knee to their new, and hairy, barbarian overlords.

﻿
﻿﻿
﻿
This was the second battle in north western Petrolia. The outcome of the DBA game was pretty one-sided - I don't remember the exact outcome, but it was in the realm of 4-1 ot 4-0.

In our very simple campaign rules, we use the differential between the number of elements the victor destroyed (4) and the number the victor lost (1 or 0) as a die modifier on the rolls to determine if areas adjacent to the battle site capitulate. So, if it were a result of 4-3, the neighbouring territories surrender on a '6', if it is 4-2 they surrender on a '5-6', and so on.

It is a simple system, but it helps make the battle results count in the wider strategic context, since we don't carry battlefield losses forward to the next game. It also makes conquering territories in a central position, with more neighbouring areas, more desirable since there is more chance to expand the realm.
Posted by Pattus Magnus at 07:32 No comments:

Territory following the Battle of Hawkwood


King Daniel, First of his Name, carried the day in glorious victory against the forces of the nefarious Grand Duchy of Hawkwood.
Embassies to Ranchlands and Brentwood were refused and those insults to his Majesty shall be put right in the New Year.

Posted by Pattus Magnus at 14:03 No comments:

Petrolia is a fictional continent based (loosely) on the map of the city where I reside. Petrolia was created, by Pattus Magnus the Hairy, High Chief of Montgomery (me) in collabotarion with Daniel the Vast, First of his Name, King of Citadel, as a backdrop for our tabletop wargame battles.

Essentially, following each game (usually, but not always, DBA) we play against each other, the victor chooses a city or town adjacent to one he already possesses. In addition, towns that are adjacent to the newly acquired territory may also decide that discretion is the better part of valor and capitulate, rather than risk being sacked.
So far we have included the results of six games in the on-going saga.
In addition to recording the Chronicle of the wars in Petrolia, I will also be using this blog as a site to document some of my other wargaming adventures, as well as occasional WIP posts about wargame miniatures painting and terrain making. ﻿
﻿
Posted by Pattus Magnus at 13:52 No comments: